History of the Patent and Trademark Resource Center

On July 28th, we will be celebrating the Kelley Center’s 45th anniversary as a Patent and Trademark Resource Center (PTRC; previously Patent and Trademark Depository Library). Curious about the history of the Kelley Center’s participation and partnership with the USPTO? You’ll have to come to the event for the full story, but here are some highlights. 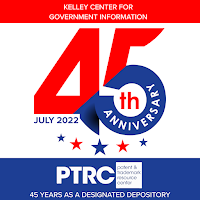 In 1977, the USPTO founded the Patent Depository Library model, the modern predecessor to the PTRC program. 22 libraries were designated, replacing the former concept of a depository that had been around since the 1800s. The original members did not include Fondren Library, but on July 13th, 1977, Barbara Kile, then-director of government documents, alerted her contemporary University Librarian, Richard O’Keefe, of the requirements to join and launched the process. By the 28th, Fondren Library received its official designation from Commissioner C. Marshall Dann.

Fondren Library was the first PDL in Texas, and Barbara Kile and he colleagues quickly became an active proponent of the Kelley Center participating in new programs and pilot projects.

In the late 1980s, the Kelley Center and Barbara Kile gained prominence among depository libraries and other related areas. Kile was a leader in the PDL Association, and Fondren was selected as one of 10 patent depository libraries to participate in a pilot study on the feasibility of the cost effectiveness of a new CD-ROM system. Soon after, Kile was invited to become a member of the Advisory Committee for Patents and Trademarks.

A successful partnership with a private patent publisher expanded access to foreign patents and searching tools in 1988, and was the first of its kind.

Trademarks were officially given a place in the program name in 1990, when the USPTO reorganized and reallocated departments. Around the same time, it was discovered that 227 reels of patent microfilm were stolen from Fondren; evidently, it was part of rash of patent microfilm thefts from multiple patent depository libraries.

Wondering about the details omitted, and what happened later in the 90s and 2000s? You can find out at the event during the presentation from 1:30-2:00pm!